As if we needed another reason to respect women and the value they represent.

Women are by far the dominant purchasers of nutritional supplements and natural products in addition to other household spending categories.

Women are the driving force behind the restoration economy that is arising out of the domains of eating, food, nutrition and health. The values women express across these market categories are unlimited in their variety.

The power to impact or transform these markets comes from the leverage  well educated, savvy, loyal, repeat consumers bring to a market.

Savvy marketers understand that their return on investment occurs when they deliver a rewarding experience for women.

The study reports that five years ago the most hated category by women included health care.

This level of education and engagement is showing up everywhere women have a say about what they’re willing to  purchase.

That’s good news for any marketer playing the “Is It Healthy?” Game.

Women are bringing in a bigger and bigger slice of the household income pie. Marketing firm Boston Consulting Group (BCG) says the gap between what men and women earn is closing by 1% per year, with 60% of women in the U.S. active in the work force.

Women are forecast to add $6 trillion in additional earned income

over the next five years.

The firm, however, finds that marketers aren’t taking that growing buying power too seriously. It has come out with its first global examination since 2009 of women as consumers. “Women Want More: How to Capture Your Share of the World’s Largest, Fastest-Growing Market” is the study’s baroque title, but women are anything but, per the study’s data. The firm notes that women are forecast to add $6 trillion in additional earned income over the next five years.

But consumer-facing companies just aren’t acting on the obvious: women spend are not only becoming better educated than men, but are also spending like it. So marketers might want to add a dash of this data to their marketing mix: over the next five years, working women will drive an increase in earned income globally from $12.5 trillion to $18.5 trillion. The global average of female earned income is expected to rise by about $8,000 during this period, per the study.

Michael J. Silverstein, a BCG senior partner, says women’s increasing economic influence is driven by several trends: they are the majority of undergraduates worldwide (57% of students in college or higher education in the U.S. are women); younger women are entering the workforce “with no limits on their ambition,” said Silverstein; they are increasingly well off and very profitable customers; they are willing to pay more across many categories for products and services; as they become increasingly time constrained, they will trade money for time savings.

The 10 categories women are most dissatisfied with are, starting with the worst, home remodeling, work clothes, home cleaning, physicians, lingerie, hospitals, cars, insurance, formal attire, and cosmetics. Five years ago at the bottom of the barrel were financial services, health care, and consumer durables (including cars.) Women cite poor product design for women; clumsy sales and marketing; inability to address need for time-saving solutions; inability to provide meaningful hook and differentiation and failure to develop community.

The study also notes that women — like men — are stuck in a time management bog with demands like household and finances dragging them away from time for themselves. Here’s a shocker (not): worldwide, 40% of men rarely or never help their wives with home chores. It’s a shocker because the number is probably closer to 98%. Brazil tops out at 63%. The United States and United Kingdom both are at the lower end of the spectrum, with 41%.

Silverstein argues that companies that have figured out what women want have grown sales, loyalty, and category dominance. Baby brand Gerber, he notes, has done well by expanding its product line based on research into what mothers want for their young children; Procter & Gamble’s Swiffer makes floor work faster and less labor intensive; Victoria’s Secret continually changes its undergarment line. The Limited also gets a kudos in the study.

“Women are still burdened by having to manage the family finances, with not enough money, not enough time, and too much stress. Winning companies will address their dissatisfactions with bull’s-eye responses and gain the lead in both current female-controlled spending and incremental spending,” he says.

“Young Mother with Baby and Tablet” photo from Shutterstock.

Content marketing professionals reaffirm that relevance plus relationships lead to results. If either includes being easy and engaging, effective is inevitable in the majority of cases. 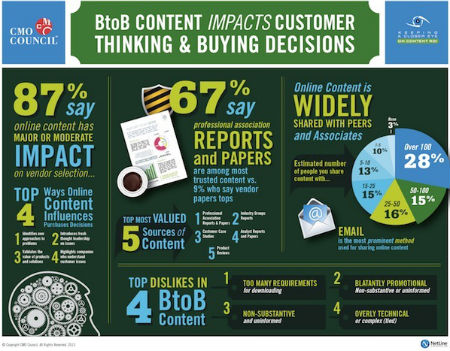 The vast majority of b2b buyers find online content a valuable resource when researching products and services, according to a study released last week by the Chief Marketing Officer Council.

The study, “Better Lead Yield in the Content Marketing Field,” was based on an online survey of more than 400 b2b buyers, conducted in April in partnership with NetLine Corp. Eighty-seven percent of respondents said online content has either a major or moderate impact on vendor preference and selection. 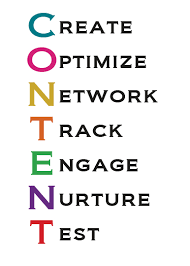 “Most companies spend at least 25% of their marketing budgets on content creation and distribution on digital channels,” said Donovan Neale-May, executive director of the CMO Council, pointing to a recent survey by the Content Marketing Institute. “Our focus [with the CMO Council study] was to see how effective is that spend, to what degree are companies producing content that is meaningful and useful to buyers, and what are the nuances around how people are utilizing and sharing that content with their peers.”

According to the study, the most valuable sources of online content in shaping purchase decisions are:

“Clearly, what we’re seeing is that people want peer-based content,” Neale-May said. “Those are the most trusted sources—professional affinity groups where buyers can get feedback or advice, industry groups and professional associations.”

The specific types of content b2b buyers value most when making purchase decisions include:

“Content should be created and deployed to take customers through the various procurement phases and upsell and cross-sell opportunities, not just [to] acquire a lead,” Neale-May said. “In qualitative interviews, we found that people are much more cognizant of content being a requirement across the entire customer life cycle.” 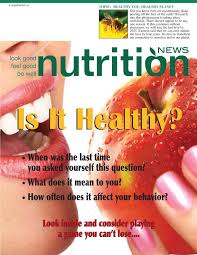 “I don’t think marketers are necessarily getting it,” Neale-May said. “Part of the problem is that a lot of content gets produced by product people—not content strategists—so it is more self-serving. Marketers are wasting a lot of money putting out content that people are not interested in or responding to.”

with more than 25 people.

“These findings suggest that the value of a [content] download is probably greater than you think,” Neale-May said. “Marketers need to rethink and be more adept at tracking where and how content gets shared. Despite all the talk about social networks and collaborative networks, the primary way for sharing content is still through email.”

The survey also found that

“Our goal is to try to get marketers to create better content and track consumption and use of content across the entire customer life cycle,” Neale-May said. “We find that a lot of companies don’t have content strategies, don’t evaluate the performance of the content, don’t have strong advocacy themes and content performance isn’t what it should be.”