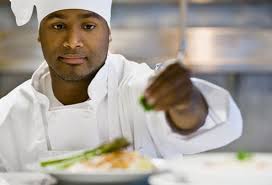 When at risk males were surveyed regarding their interests, cooking and food service were at the top of the list. Seen as a career track, food is rapidly becoming a driving force throughout multiple sectors of the economy. What would it look like if we used eating, food, nutrition and health as economic redevelopment drivers?

Between 2004 and 2011, cooking moved to seventh from 12th on a list of men’s top interests, according to a recent study by the Private Label Manufacturers Association (PLMA). That puts cooking ahead of politics and reading and right below cars. And another PLMA study found that 47 percent of men polled do more than half of their families’ shopping and cooking.

It’s not surprising then that Nielsen research shows men have gained or maintained trip share in all retail channels except drug stores since 2004. While women still drive 64 percent of all shopping trips, dominating every retail channel except convenience/gas, the rise of male shoppers cannot be ignored. As men assume more household responsibilities, their new influence over how cupboards and refrigerators are stocked requires food manufacturers and retailers to fine-tune their marketing plans or risk losing business.

As with so many other areas, men and women shop differently. Women are more likely to seek out deals: they buy more on sale in total (34% of dollar purchases versus 28% for men) and shop with coupons about twice as much as men (7% versus 4%).

So what are the sexes buying differently? Women dominate trip share for beauty, baby and basic food categories. Female share of category sales in many beauty and baby categories are between 79 percent and 90 percent. Female shoppers hold a 74 percent share of category sales by gender for items such as baking mixes, desserts/gels/syrups and breakfast foods, leaving men with just a 26 percent share. Even though men spend more per trip than women in many of these categories, more women buy and they buy more often.

Convenience stores, however, break all the rules. Male shopping trips in this channel lead female trips 57 percent to 43 percent. The channel’s unique position could set an example for others to follow. To help simplify shopping like convenience does, top-selling categories—such as beer, carbonated beverages, snacks, juices, bread and milk—are already collaborating with retailers to harness store layout, package design and in-store signage to create themed deal areas that bundle items, benefiting retailers, manufacturers and consumers.

When it comes time to shop, both genders share a preference for heading to the stores on the weekends. Men and women also buy many of the same items when they head to the store: bread/baked goods, fresh produce, snacks and milk appear among the top 10 most frequently purchased categories for both sexes.

Men and women also have similar habits when picking products. They equally favor brands compared with private label (about 80% versus 20% for both), although women spend more on both. And both sexes show strong preferences for brands in certain categories. Women account for 81 percent of dollars spent for branded hair care. And well over half of men buy branded products in motor vehicle care (57%) and liquor (58%).

What do These Differences and Similarities Mean for Retailers?

Men and women’s unique shopping habits can provide challenges to retailers attempting to reach both. However, the benefits can far outweigh these difficulties—especially for certain categories and channels. Men’s lower interest in shopping for deals provides a unique opportunity for premium priced brands and non-promotional items—especially with men under 36 years of age. And while convenience is a nice-to-have for female shoppers, it’s a deal breaker for men. Does your marketing exploit or ignore this positioning opportunity? Marketers with campaigns at odds with their shoppers’ preferences may be overdue for a review.