A receipt should be a chance to say more than “Thank you for shopping!” 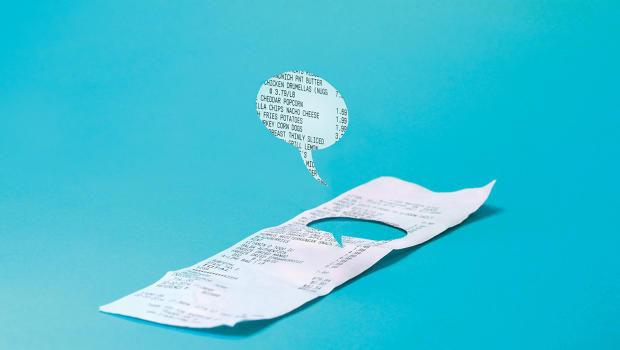 “What if we see the receipt more as a publishing medium?” Square CEO and Twitter co-founder Jack Dorsey told retailers at their annual confab earlier this year. “A product unto itself that people actually want to take home, that they want to engage with, be fully interactive with?”

So it’s come to this: After encouraging us to communicate in 140 characters or less, Dorsey now wants us to tell stories via automated emails and tiny dot-matrix printers. Receipts are the next great frontier. And it’s actually not a bad idea. Dorsey’s comments were a relatively brief part of his keynote, but Square later confirmed that it is testing a new receipt design. “[Receipts] should be more than just a list of what they bought and the last four digits of their credit card,” says a Square spokesperson. “[Receipts] should allow them to connect better to the merchants they had this experience with.” [Slow clap.]

We now live in a world where everyone can more easily create, connect, and sell than ever before, but the actual transaction stands as one of the last barriers to extend tone, brand, and voice. There’s a way to make receipts more interesting that doesn’t also annoy everyone involved. A receipt can simply be a record of a transaction, something you search for when trying to categorize expenses or explain to a partner why you spent $46.30 on “Ben.” But a receipt can also be a platform for creativity to extend the relationship between customers and merchants into something more interesting.

I had this epiphany during my book tour in 2012. It was easy to connect with people on Twitter and Facebook, but when I wanted to talk to actual buyers–people spending money and not just clicks–I had to resort to inference and guesswork. Could I assume people tweeting with my hashtag also bought my book? No. Was it weird to publicly tap them on the shoulder and point them to a site with more content? Yes, yes it was. Why was I reverse-engineering a customer list via Twitter search?

The sad answer is that I had no other recourse. Amazon, iTunes, and offline retail bookstores put a wall between me and my most invested community. The generic tone of their transaction receipts felt like a missed opportunity.

What I’d love to offer, and what I think many buyers might like to see, is a chance to allow sellers to start a conversation. Whether via a marketplace platform like Amazon or a point-of-sale replacement like Square, a producer would have one shot–­perhaps a link, button, or a short line of text–in which to say to a buyer, “Hey, thanks for the money! Here’s some other stuff I’m up to. Click if you’re ­interested.” It’s not an extra email.

It’s not an auto-enrollment to a list buyers will never shake. But if you’ve bothered to spend hard-earned (or easily stolen) money on something, there’s a decent chance you want to hear what the maker of that thing has to say or sell beyond your purchase. If you’re a seller with a story to tell, this feels obvious.

Sometimes commerce isn’t just commerce. It’s about what it represents: interest. Buyers have spent money, but they’ve often made a statement. We owe them a chance at something more interesting in return.

[Illustration by Jeric Pio Agustin] A version of this article appeared in the April 2014 issue of Fast Company magazine.  Baratunde Thurston is the author of the New York Times best-seller How to Be Black and the founder of Cultivated Wit, a comedy and technology company that tells stories in engaging ways.